I recently got in touch with people from the German city of Bacharach in the Rhine Valley. It was about an old building from sixteenhundred-something that we're trying to save — and visiting Bacharach for the first time in my life I had some of Burt's great melodies in my head.

I asked about the relationship of the person Bacharach and the city of Bacharach — and what people told me was that Burt's family roots came from there. I wondered if he was honorary citizen — but he is not. Hard to believe …

Reading some articles I learned that Burt never made it to Bacharach. He seemed to be on his way some time in the fifties when he was in Germany as a soldier. He took a boat going down the Rhine River but was so frustrated to see all the destroyed cities and villages that he turned around.

Does anyone of you know details?

Thanks for your help,

by gabba
Hello there. Burt's family roots did not came from the city of Bacharach,but exactly from Hohenroda,a little town close to Kassel,exactly in the centre of Germany.So quite far from the city of Bacharach.His great grand father was a Rabbi from the synagogue from that place.He left in the middle of the 1800 century to establish himself on the States,while there were already symptons at the time against the Jews.The remaining releatives left in germany they found the horror of the concentration camps.Burt was placed in Garmisch after the war ,but i don't think he had the energy(it took a long trip to go to Hohenroda from Garmisch) ,or the will to visite a place where he did not belong too much,while he was never interested in his religion's side of the family.this is as far as i know of course due to my informations and acquaintance to him .Also in his biography Burt says that even his dad did'nt care too much about his family roots .well. kindest regards

thanks for your reply! This brings a new view to me — and even more questions.

My source is an interview Burt gave to the German magazine called Stern in 2008. It is available online and I post a schreenshot of the source and the interesting lines. Here's the translation of the relevant part:

Q. People say that your family roots are in Bacharach at the Rhine. Have you ever been there?

A. In the early 50ies I was stationed as a soldier in Garmisch. I wanted to visit my "roots" then. I took a boat and went down the Rhine River, but it was terrible, destroyed cities everywhere. I couldn't stand it. I never made it to Bacharach.

How does this go together with Hohenroda? 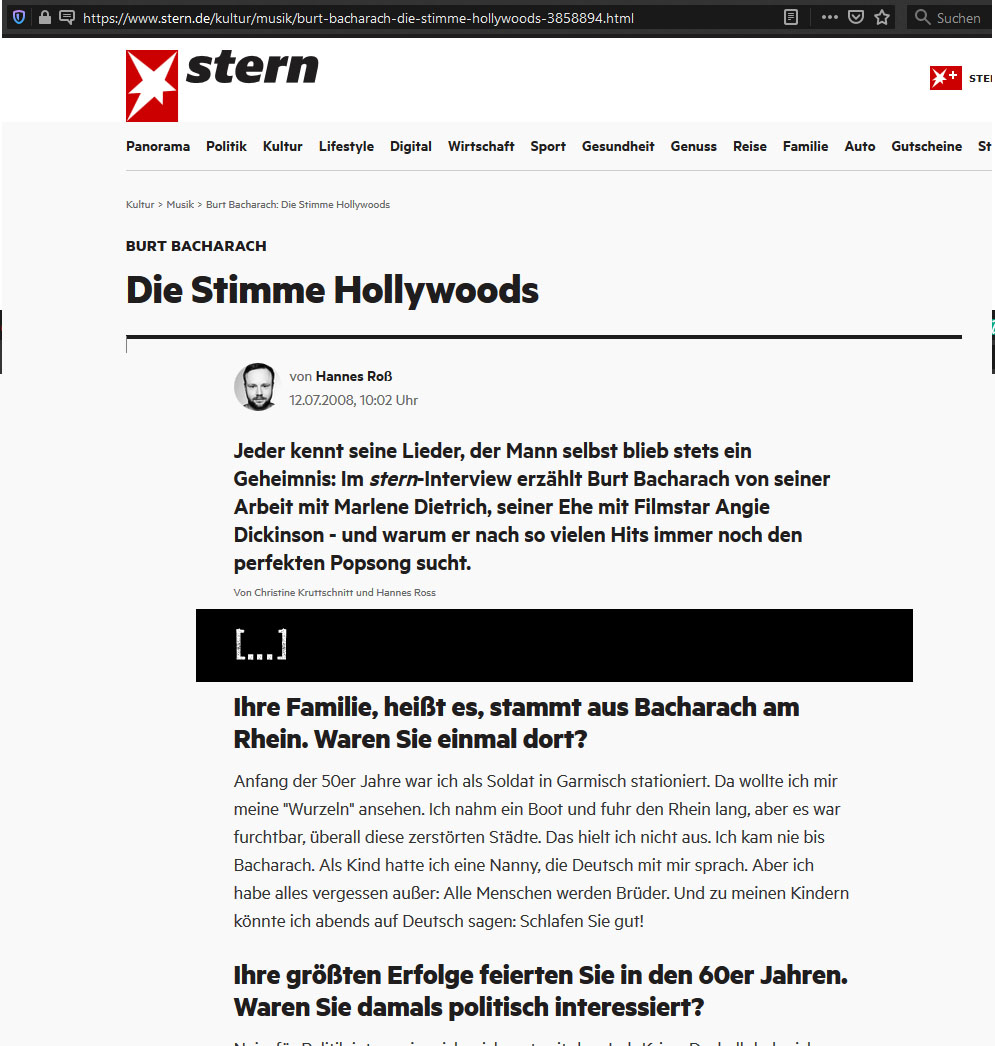 This is what I have officially for the heritage of Bacharach. If you open it on his name and you go back with the pages you’ll see something interesting. Have fun.bye
All times are UTC-05:00
Page 1 of 1